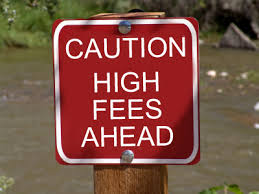 The exploitation of customers by their banks is a global phenomenon. In the USA, 6.5 percent of households are unbanked, meaning they don’t have a bank account at all. Half of those affected report it’s because the fees are too expensive.  JPMorgan Chase, for instance, made $1.9 billion from overdraft charges alone in 2016. At some large regional banks, fees accounted for almost 40 percent of revenue that year, CNBC reports; U.S. consumers as a whole paid $34.3 billion in overdraft fees in 2017. In the West, the high costs associated with financial services from banking to borrowing eat away at many people’s incomes. So, majority of the charges are for borrowing or unauthorised overdrafts.

Globally, banks love Fees and Charges. As a business model, the attraction is obvious. One $35 overdraft fee per year generates as much revenue as lending out $1000 at 3.5 percent for the year. The main difference in the proliferation of bank changes from Nation to Nation in the Western economies is Regulation. Where the regulatory frameworks is strong, bank fees are controlled as in many EU countries. But in a place like America, where there is little regulation (Trump has even waived some that were to come into effect), Bank charges are a major Revenue source for banks. But majority of the charges are customer habit contingent; unlike in Nigeria where you are charged multiple charges for doing basic banking without any borrowing involved.

Many Western consumers don’t know it’s possible to avoid overdraft fees entirely by managing their finances better. So in the West where borrowing is easily available, Bank charges are also on the rise as more folks borrow. But in Nigeria where there is very little lending going on to the masses, majority of the charges are compulsory and apply to you even if you have not borrowed any money from the bank.

In many Western economies, Banks employ “trick-and-trap” fees by hiding them in the complicated terms of agreement that accompany many consumer transactions, which effectively trick consumers into unknowingly paying exorbitant costs and charges. So, the bank charges rip off is a global phenomenon. That is the nature of Capitalism which seeks to exploit and maximise profits.

What is iniquitous about Bank Charges in Nigeria however, is the compulsory nature of many of them; their many titles and how most of the charges apply regardless of your banking habits. You can deposit N1millon into a current account in Nigeria, don’t use the account at all but come back in 5yrs to meet Thousands has been deducted in numerous charges by the bank.

According to World Bank reports; up to 60% of Nigerians are unbanked. That is; they do not have bank accounts at all. Yet in Nigeria Bank charges represents as much as 75% of some Banks Revenue. In the USA, that is 20% on average, although it can be as high as 40% in some regional banks. Instead of earning money by borrowing and lending money to the real economy, banks in Nigeria simply turn to fees & charges to boost profits; with the acquiescence and even encouragement of the CBN.

The CBN is headed by a Banker who is seen as sympathetic to his constituency (commercial banks) and their need for more profit. Hence even the restrictions imposed by Lamido Sanusi that reduced the burden of fees and charges have been reversed by Emefiele.

SYMPATHY WITH THE BANKS – THEIR HIGH COST OF DOING BUSINESS

Banks will understandably argue they have a huge cost to cover if they are to operate successfully in Nigeria. While Nigeria needs 60,000 ATMs to serve the everyday cash needs of Nigerians, there are only about 18,000 ATMs across the country all owned by banks. So, to ensure the machines keep working fine maintenance is outsourced to companies such as Inlaks Computers, Computer Warehouse Group (CWG), NCR, and others. These companies are paid a fixed fee for the maintenance of each machine which may range from N200,000 to N550,000 per ATM. These cost pressures led to Banks successfully lobbying the CBN to allow ATM Charges under Emefiele (although Sanusi scrapped this).

Diamond Bank could be spending as much as N350 million on maintenance of its ATMs per year. The banks feel customers need to help offset these costs through charges. This is a fair expectation. But is imposing over a dozen charges & fees on each customer, along with commonly witnessed terrible service the solution? I believe the pendulum has swung too far in the direction of banks and to the detriment of the customers.

So, there is a credible case for some charges by the bank. What is not acceptable is the LONG LIST of these charges and their ever-increasing numbers on top of very poor customer services experienced by many.

According to Punch; Between January and June 2019, four leading banks generated N24.3bn from account maintenance charged on their customers’ accounts. This is an increase of about 19.18 per cent from N20.39bn generated in the corresponding period in 2018. The Senate had in 2018 called on the Central Bank of Nigeria to suspend the deduction of card maintenance fee; but the charges still apply.

Banks are acting like a cartel and not following CBN guideline and the regulator is wilfully blind to the rip-off of customers. For instance, CBN guidelines prescribed that the rate chargeable by a bank for ‘Current Account Maintenance Fee’ (CAMF) is negotiable with a customer subject to a maximum of N1.00 per mille. This means; no bank is allowed to make this charge without first, negotiating with the customer and the agreed rate must not be more than N1.00 per mille.

The CBN guidelines places the burden on the banks. It is their responsibility to call the attention of their customers for negotiation of this fee. But that never happens in most cases. Most Customers are just charged this fee. Many may have an actionable case against their banks if the fee has not been negotiated. You can start by writing to your bank that they have breached CBN guidelines by not negotiating the CAMF with you and hence you demand a refund. Copy CBN in your complaint. If enough people do this, something will give. Sadly, the silence of the CBN has emboldened the banks to misbehave and cheat customers. This must stop. Only pro-active steps from the customers will force action from CBN.

Most Nigerians are not aware of these negotiable charges as stipulated in the CBN guideline and banks are therefore taking advantage of it. This actionable claim will apply to all charges that is classified as ‘Negotiable’ in the CBN guidelines for which you have been charged without negotiation. So it will affect each person differently.

But a class action suit may be worth pursuing as this is a wholesale breach of CBN guidelines by all the banks. But CBN should be given the first opportunity for redress by a massive citizens petition against the banks to the regulator.; failure after which a test case can be instituted.

THE ROLE OF CBN – CBN should Consider stopping Fixing of Bank Charges Centrally.

In its Banking charges guideline, CBN has THREE categories of instruction to banks on charges for services. These are:

So ATM withdrawal fee and Card Maintenance fee are Fixed amounts set by the CBN for all banks. Charge for special clearing of cheque is left as “Negotiable” by CBN for each bank to decide. And for others services, CBN says banks can charge UP TO a given limit. This is too much central control in my view; especially when CBN has wilfully refused to penalise and stop the rip-off habits of the banks.Nigerian banks have now relied on fees to grow profit, often encouraged by CBN.  As I have shown above; Charges are not new in the banking industry worldwide, but regulators role is to act to ensure fair competition that see customers choose service providers that offer the best value. It may be time for CBN to step back from this command and control approach. Banks can become more innovative in their product offerings if they know that the quality of products and services, they offer will determine how many customers they get and how much they are able to charge. But with CBN creating charges by fiat, Banks realise they can charge that amount regardless of their service quality. So where is the incentive to compete and do better if you are able to charge the same as everyone else, even with a poor quality of service.

The newly announced charges for cash deposits over N500K is ill advised. Many will simply refuse to engage with the formal banking system as these charges are additional to the rips-off fees charged by the various banks. In an interview on Channels TV today, an INEC official confirmed that their analysis shows that 30% of Nigeria is not covered by any mobile signal. I suspect the true figure may be more than that. So how do you go cashless in those blackspot areas. Even in Lagos, there are failures all the time of POS machines due to signal problems.

So CBN is putting the cart before the horse. And this shows lack of joined-up policy formulation. Before this sort of policy is announced, CBN should have worked with applicable government departments to confirm when we can have a nationwide reliable mobile data coverage and then use that as a guide as to when its policy will come into effect. CBN cannot continue to act as though it is a country by itself and that it can act in isolation of contending and dependent realities in other areas of our national life. This new Charges should be scrapped until such a time that the infrastructure exist to provide reliable alternatives.

Too much stick by CBN is killing interest in the banking sector by many Nigerians; a bit of carrot is long overdue. Nowhere in the world has a national cashless policy ever been successfully deployed simply through Sticks and Penalties like CBN is doing. Adoption tend to be driven by incentives, Carrots and inducements. By winning hearts and minds. Maybe it is time CBN try this angle.

WHAT ARE POSSIBLE SOLUTIONS? – So, what should happen now?

If reforms are not implemented quickly, more Nigerians will move away from using the Banking system (except when they have no choice). This will reduce the net of customers using the services of banks even further below the 40% of Nigerians currently estimated as having bank accounts.

I wish the CBN well as it reinvents itself as the true and fair regulator of the Banking sector. The current impunity by the banks must end.

A PDF copy of the CBN Charges guideline can be found at: https://www.cbn.gov.ng/out/2017/fprd/guide to bank charges circular to all banks other financial institutions and mobile payments operators.pdf

can be reached at @DrCOmole