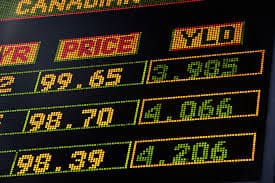 The FGN bond market opened the day on a very calm note as traders tidied up their books for the end of Q3 2019. We, however, saw some bargain hunting for the on-the-run 10- and 30-years bonds from some local investors looking to fill some of their lost bids at yesterday’s bond auction. Consequently, yields closed relatively flat DoD with the 30-year bond repricing upwards by 6bps to reflect the previous day’s auction results.

We expect the market to maintain a slight bullish tilt as the bargain hunt for attractive yields on FGN bonds is likely to continue in the short to medium term.

The T-bills market traded on a mixed note today, with demand seen at the long-end of the curve, while the short- and medium-end of the curve remained pressured due to the floatation of an OMO T-bills auction by the CBN.

The CBN offered to sell an aggregate amount of N250bn worth of OMO T-bills across 3 tenors (84day, 184day and 364day). As usual, demand on the 84days and 184days remained weak as most investors queued at the long-end of the OMO T-bills curve.  CBN eventually sold a total amount of N302.42Bn with the bulk of the sales done on the 364days (N300bn). The highlight of the auction was CBN’s 46.00% pro-rata allotment of the 364day T-bills with stop rates closing 2bps lower than the previous OMO auction.

We expect the market to trade on a firmly bullish note tomorrow with most demand skewed towards the long end of the T-bills curve as investors seek to fill their lost/prorated bids from the OMO auction. The ample liquidity in the Money Market is also expected to spur fair demand in the T-bills market.

Money market rates increased DoD by about 3.00% but remained depressed at single digits, with the OBB and OVN closing at c.6.43% and c.7.43% respectively. System liquidity is estimated to close at c.N400bn positive, due to the positive cash inflows from OMO T-bills net cash position i.e. (OMO T-bills Maturity vs Sales) of about N120bn, and c.100bn in retail FX refunds.

The NGERIA Sovereigns reversed losses in today’s trade session, as oil prices strengthened by +40pct. We noted some demand interest from offshore and local clients across all the tracked papers, notably the 2038s and 2047s maturities. Yields closed lower by c.9bps on the average across all the papers on the sovereign curve.

Whilst proper and reasonable care has been taken in the preparation and accuracy of the facts and figures presented in this report, no responsibility or liability is accepted by Zedcrest Capital or its employees for any error, omission or opinion expressed herein. This report is not an investment advice or a research recommendation and should not be regarded as such. The information provided herein is by no means intended to provide a sufficient basis on which to make an investment decision